by admin
5 Comments
For decades the Leg Extension, Squat, Leg Press and Lunge have all been used by general fitness clients, rehab patients, and elite athletes alike without much on the side of specific research to help the fitness coach in determining which exercise to use or recommend for a specific goal or need. To understand the concepts and summaries of this article let’s start by taking an in-depth look at the internal components of the knee. As a trainer or coach you will probably hear over and over again about knee pain in all the people you will work with. Hence, a clear understanding of knee function and how the internal components affect such function is critical for programming, progressions, and when needed, regressions. The knee, in its simplest description, is the union of the Femur, Tibia, and Fibula with a fourth and independent triangular bone that covers the front union, the Patella. Fig 1. Together, along with the structures that keep these bones aligned and able to provide us with flexible motion, are what we refer to as the Knee Joint. Technically named a synovial joint the knee is the largest and most complicated joint in the body and commonly referred to as a “hinge” joint for its linear and door like movement patterns. 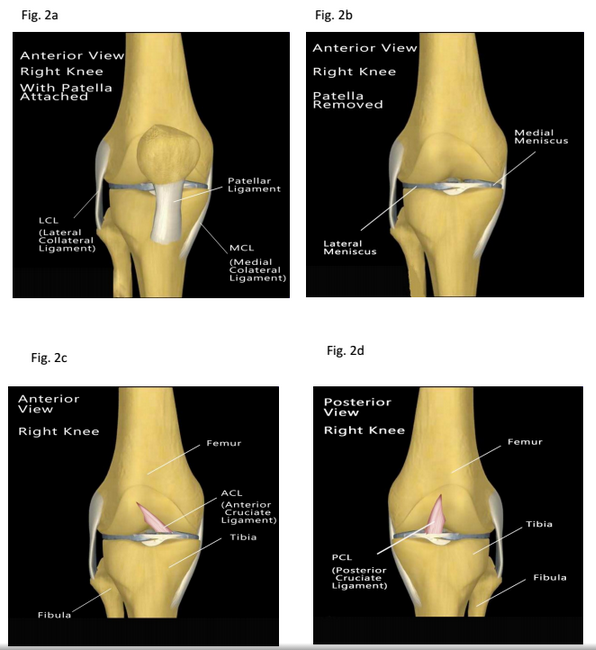 Tendon and Cartilage Anatomy of the Knee Using figures 2a through 2d, we will start by identifying the four ligaments along with the menisci, a type of hybrid cartilage/ligament which acts as a shock absorbing barrier between the articular cartilage on the ends of the Femur and Tibia. Keeping in mind that figures 2a through 2d are all of the right knee, looking at it as if we were looking at someone standing directly in front of you, your view towards the left would be the lateral side of the body while your view towards the right would be towards the middle of the body, hence the term “medial” where the two inner portions of the knee would touch. Lateral Collateral Ligament or “LCL” sometimes also called the “Fibular Collateral Ligament” for its attachment sites connects the lateral side of the Femur to the lateral side of the Fibula. The main purpose of this structure is to limit the sideways motion of the knee. Therefore, any hyper or excessive movement in which the knee has to over stabilize against a sudden change of direction that the surrounding musculature can’t control will damage this ligament. Medial Collateral Ligament or “MCL” sometimes also called the “Tibular Collateral Ligament for its attachment sites connects the medial side of the Femur to the medial side of the Tibia. Like the LCL, the MCL limits the sideways motion of the knee and is generally injured when the stress of quickly changing directions over powers the force and stabilizing abilities of the surrounding musculature. Some common athletic activities that would be culprits for such injuries are, but not limited to, racquetball, tennis, basketball, football, & soccer while common non athletic ADL’s that would injure these two structures are stepping out of a car, taking a corner in a grocery store isle while pushing your cart, or missing a step while walking and quickly having to regain control in a sideways motion. Anterior Cruciate Ligament “ACL” and Posterior Cruciate Ligament “PCL”. The word “cruciate” meaning “crossing” from one side to the other and/or one over the other. The ACL connects the Femur to the Tibia along the front center part of the knee. Specifically, one end connects to the anterior Tibia along the medial side of the Tibias’ sagittal line while the other end connects to the deep portion (almost to the rear but not quite) of the Femur along the lateral side of the Femurs’ sagittal line. If you look carefully at fig. 2c, you will be able to identify a slight diagonal angle to this ligament. The PCL is the strongest ligament and primary stabilizer of the knee also connecting the Femur to the Tibia but through the posterior side. (Fig. 2d). The ACL, one of the most common ligaments injured in sports, is responsible for controlling the allowable rotation of the knee along with limiting the forward trajection of the Tibia under the Femur during, but not limited to, squatting, lunging, landing, running, and walking while the PCL limits the backwards motion of the knee. Recent studies also indicate that the PCL also prevents medial-lateral (side to side) and rotary movements. (10) The ACL is most commonly injured quick rotational movements where the foot is planted but the upper body is changing directions in a rotational fashion. An athletic example of such injury is when a basketball player is coming down from a rebound and accelerating with the upper torso in a direction opposite to how the feet are grounded without pivoting. An ADL example would be someone washing dishes with both feet grounded and abruptly twisting the upper torso, hips, and femur in an opposite directions to that of which the feet are facing without allowing for a slight pivot or complete re positioning of the foot. Cartilage, sometimes referred to as “articular cartilage” can be found at the end of the Fibula, Tibia, Fibula, and behind the Patella. Cartilage is a type of connective tissue that has no blood vessels or lymphatic’s which makes it a tissue which is very slow to heal. It also has no nerves therefore insensitive. Hence, the ability to absorb the impact, especially in the knees, and transfer forces in a pain free manner. In the knee we have two types of cartilage, Hyaline which covers the end of the Femur, Tibia, & Fibula and the Menisci, a specialized hybrid type of cartilage that provides for the needed cushioning between the Femur and Tibia. Composition of Ligaments and Cartilage Structures 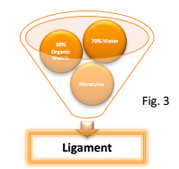 Ligaments, which connect one bone to another are composed of approximately 70% water and 30% organic matrix along with fibrocytes, the specific type of cells that make up tendons and ligaments (1,2). Without getting into chemistry and biology too deeply, the organic matrix is a combination of ground substance, (a combination of protein and carbohydrate complexes forming a gel like substance) and Collagen. Fig. 3. To give further explanation, Fig. 4 illustrates the composition of the Organic Matrix into a classification of its internal composition. In Ligaments and Tendons, 90% of the Organic Substance is Collagen. Collagen comprises 25 to 30% of the protein in the body with at least

15 types of collagens currently known with more recent studies identifying more than 20 types! (2, 4) Collagen Fig.4 production in the body can vary from individual to individual with the aging process and genetics playing the biggest role in the ability to make adequate amounts for tissue repair and maintenance. In tendons and ligaments the type of Collagen found is called Type 1 which identifies its structural alignment, splice variants, and function when compared to the other many types of collagen in the body. (3, 4) Type 1 collagen fibers tend to be more rigid than Type 2. Hence, the ability to withstand the forces generated by movement and keep the bones they hold together without a daily injury. Cartilage, which covers the end of all bones that touch each other is a bit different in its composition when compared to ligaments and tendons. When discussing the ligaments above and as will be discussed in part 2 of this series when we cover tendons, the cells that make up those structures are called “fibrocytes”. In Cartilage the cells are called Chondrocytes and the type of collagen is Type 2 vs. Type 1 in tendons and ligaments. (1,6,7) Varieties of Cartilage In the human body we can find three (3) types of cartilage. 1- Hyaline or Articular Cartilage is the main type of cartilage we will focus on with this article. This type of cartilage is most specifically found at the end of the long bones such as the Femur, Tibia, Fibula, Humerus, Radial, and Ulna but is also present in the sternum, ribs, and several other locations along the skeleton. It is bluish white in color, flexible, with low friction qualities that resist wear and tear and designed to bear and distribute loads. Therefore able to provide the cushioning needed for repetitive movements such as walking, running, jumping which are commonly referred to our “Activities of Daily Living” or “ADL’s, exercise, and sports. 2- Fibrocartilage , the second type of cartilage we will discuss. It can be temporarily found at bone fracture sites and is present in three major locations in the body. The intervertebral disks of the spine, covering the mandibular condyle in the temporomandibular joint, and in the Meniscus of the knee. Hence, the importance of identifying its composition and purpose. 3- Elastic Cartilage, the third type of cartilage is found I the pharyngotympanic tubes, epiglottis, and earlobes where the supportive tissue (cartilage) must possess elasticity. Hence, the name elastic cartilage. Meniscus, is the final structure we will discuss in this article. (Fig 2b) The meniscus are two C shapes hybrid type of cartilage that act as the shock absorption system of the knee. The menisci help distribute stresses over a broad area of articular cartilage, absorb shock during dynamic loading, and help with joint lubrication. Unlike articular cartilage which is predominantly composed of Type 2 Collagen in the organic matrix, Menisci tissue is made up of the same coarse Type 1 Collagen Organic Matrix found in Tendons and Ligaments giving the meniscus the great tensile stiffness it exhibits. (9) Without the menisci, the daily stress of walking and the compounded effect of running, jumping, and weightlifting would be impossible. The menisci offer the additional protection to the articular cartilage covering the ends of the Femur and Tibia while simultaneously aiding in the lubrication of all the internal components of the knee.